As an undergraduate, she had completed her pre-requisites in the sciences for a career in medicine. But one winter quarter, instead of turning right to go to the medical campus, she turned left and headed to the business campus. She stood in line to register for classes (which was how class registration worked in the eighties), and she signed up for business courses. She completed her undergraduate and worked in management at a retail store.

She decided to pursue graduate work, but first she quit her retail job and took a long trip through Europe to see the art and architecture she had studied in AP European History.

“I’m a history buff, and I wanted to see the places I had studied,” she said.

She came back and took a position as a temp at Fidelity Investments during tax season and earned her brokerage licenses on her own, which allowed her to apply for a full-time job. She was able to apply much of what she learned to her personal finances, like saving in a 401K, investing and living within her means (which ultimately enabled her to “early retire” many years later). She stayed with Fidelity for about a year before leaving to pursue her graduate degree at the Eccles School.

“I found that the way to work effectively with people is developing strong relationships, inspiring the trust of others by doing what I say I’ll do, and becoming a go-to person for those around me.”

During her graduate work, she interned at Hill Air Force Base, and she eventually entered the high-tech sector in HR roles. During that time, though, Fidelity called her several times to recruit her, and about eight years after first working for Fidelity, she returned.

“I never had a second thought about being with Fidelity long-term because they had strong values about customers and employees, and they walked the talk,” she said.

She ended up working for Fidelity for over 21 years, and she moved from her role in HR to eventually being a General Manager thanks to managers above her that believed in talent development and promoting from within.

“Not every company would look at an HR person and say she is ready to take on next-level line responsibility, but I had a great boss who advocated for me, and her boss believed in developing talent. That first promotion to the line side of the business led me on the path to ultimately serve as the GM years later,” she said.

Kris faced similar challenges that many women do within the financial industry, which typically has very little color or gender diversity. Kris is a small woman, who stands at barely 5’1”, and she says she was rarely what people expected when she walked into a room. However, she was used to being the “odd-person-out” in many situations. She grew up in Utah, where she was one of three non-LDS kids in elementary school, and her business classes in the 1980s were heavily dominated by men. From those experiences, she learned the power of finding “common ground” with people, and building great relationships.

“I found that the way to work effectively with people is developing strong relationships, inspiring the trust of others by doing what I say I’ll do, and becoming a go-to person for those around me,” she said.

But she saw and experienced the many invisible barriers that diminish opportunities for women and people of color that still exist today. One example was during her annual reviews, where she would consistently receive above-average performance ratings, but was frequently told that people thought she was “too nice” and might not be tough enough (feedback more frequently given to women). Kris didn’t shy away from the hard conversations, but she also held a deep, personal value on “not being a jerk.”

“Legacy is all about the impact you have on the people around you,” she said. “Kindness and compassion actually pave the way for more authentic and honest performance conversations — people know you care and respond to the feedback.”

Despite the challenges, she encourages women to enter the world of finance.

“A career as a financial advisor is a wonderful way to earn a living, and it gives you many flexible opportunities,” she said.

Women as financial advisors are also important as women are accumulating more wealth and want trusted advisors who respect them to guide them on how to best invest and manage that wealth.

“We’d hear from women that if they go to a financial advisor with their husband, and the financial advisor is a man, he’ll typically defer to the husband. Or if the woman goes alone, she often feels condescended to, which leaves her wary of working with advisors,” she said.

Having more women in the field could allow for stronger relationships between investors and advisors.

“Women are great investors when they do decide to invest, and they are interested in partnering with a professional,” Kris said. “They are really interested in making a significant impact for themselves, their families and their communities.” 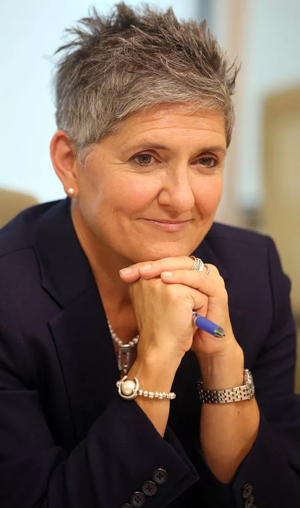 “Legacy is all about the impact you have on the people around you.”