Having a strong network and learning by doing has served Anne Taylor throughout her career.

Anne is the chairman of the David Eccles School of Business Advisory Board, and she earned her undergraduate and master’s degrees at the University of Utah in engineering. After graduation, she pursued a Ph.D. at Princeton. While there, one of her University of Utah professors introduced her to a consulting firm where she started working part-time. When that Toronto-based firm spawned a new firm in New Jersey, Anne was recruited to join full-time.  She realized business was much more her calling than academia, so she took a leave of absence from Princeton, planning to stay with the startup for three years. However, the firm was acquired by Deloitte, which began her 31-year career with the company.

Her experience in the startup world, where she had learned by doing and had become well-versed in everything from contract review to hand-binding documents to meeting deadlines no matter what it took, prepared her well for her work at Deloitte. She found she was well ahead of many of her new colleagues even though she was a decade younger than most of them. Her experience was exactly what Deloitte was looking for in a leader for their company.

“The first leadership opportunity I had was because I had the experience in that entrepreneurial environment,” she said. “I was tapped to lead  a startup business inside Deloitte for middle-market consulting, where I got to work for a leader who later became the CEO.”

That journey didn’t come without its challenges, and Anne utilized her network to find her way through. She realized that she often would stand out in a room and be remembered because she was the only woman in the room. Also, people often assumed she was younger and less experienced than she was.

“I’ve never wanted to cater to someone else’s impression of how I should act, so I could have tossed it off as their problem, but it does affect me,” she said. “So, I worked on how I could make them more comfortable. My network has been really helpful in that. It’s important to enhance or cultivate your network in your own way.”

“Work-life balance is a myth. Work is part of our life. And the boundaries between them need to be permeable.”

On Being a Working Mother

She also said that she faced much more mother-bashing than she did female-bashing throughout her career. She has four children, one when she was in her 40s, and she found that many men she worked with couldn’t empathize or understand how a dual-income household could work.

“It wasn’t a shaming thing, it was a ‘How can you possibly work as hard as I do when you don’t have a wife at home taking care of the house and kids,’” she said.

But she found ways to integrate her work-life with her personal life, and she says integration is the only way to make it work with her husband and four children.

“Work-life balance is a myth. Work is part of our life. And the boundaries between them need to be permeable,” she said.

She would be the mom on the soccer field sidelines with a pager because she could be supporting her child while still being able to be reached by work. It also meant leaving the computer at home when she was on vacation so she could truly enjoy her time with her family. She also set up buffers so that she had time to transition between work time and family time, and she set boundaries such as to have two evening work events a week instead of five, for example.

Making Time for Yourself

Engaging in self-care also proved critical for her.

“There’s a reason they say put on your own oxygen mask first,” she said.

For her, that meant learning how to carve out time that was just for her, be that focusing on fitness, healthy food, closet-cleaning, or whatever task helped her survive. She also set aside her most valuable resource — time — for the people in her life.

“Time is much more valuable than money, be it time to relax or have a lunch out with friends,” she said.

She also found ways to spend quality time with her kids, such as taking up tennis rather than golf because her children played tennis and it took one hour instead of five. She was able to bring her daughter along to an event where the aspiring astrophysicist was able to introduce the astronaut Sally Ride, the first American woman in space, to 1,000 people attending Ride’s speech.

Advice for Women in the Business World

“There is a tremendous amount of opportunity to drive your destiny,” she said.

She encourages women to stay up-to-date on their field and never become outdated in your technology skills or ways of thinking.

And, of course, build a strong network and invest in the relationships that make you successful, personally and in your career. 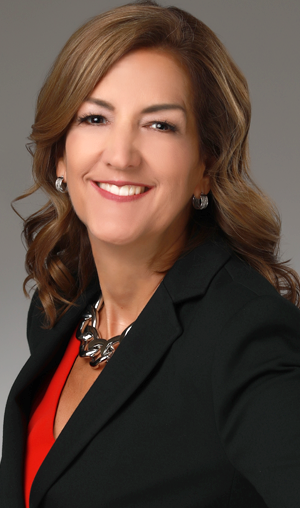 “There is a tremendous amount of opportunity to drive your destiny.”

About the Author: Sheena McFarland