In March 2003, the class made a brief live appearance on CNBC’s Power Lunch and in January 2004, the class again appeared on CNBC in a segment on D.A. Davidson’s Investment Fund program. Since 2001, the class has made regular presentations to distinguished members of the Salt Lake Business community.

Finance Students Invest In Their Future

In October 1998, David Eccles School of Business finance students joined the D.A. Davidson & Co. Student Investment Fund program, which allows students to invest $50,000 in a working stock portfolio. The purpose of this program is to bolster student learning outside the classroom in a real-world setting. The original $50,000 remains intact year to year, supported by D.A. Davidson. Any returns above five percent are split in half and shared by the firm and the Student Investment Fund. D.A. Davidson guarantees students against any losses below the original $50,000 mark, which will be replenished year to year if necessary. Since October 1998, D.A. Davidson has given almost $40,000 directly to the student portfolio and Bill Child, CEO of R.C. Willey Home Furnishings, has donated another $5,000 to the fund. In March 2004, U students received an additional $50,000 from Hal Milner in a program similar to D.A. Davidson’s. Mr. Milner has donated over $35,000 to the investment fund program.

Beginning in December 1998, students formed a Student Investment Fund Club and met regularly to develop an investment strategy, research and invest in specific stocks, listen to investment professionals, and to track their investments. The original club that first year was comprised of 12 students and their advisor, Professor of Finance Liz Tashjian.

In the fall of 1999, the Student Investment Fund developed from a club into a restricted-enrollment class. This class is limited to 18 students, and students wishing to take it must apply for acceptance. Tashjian teaches the year-round class. The class meets once a week to track the Fund and to research potential investments. Each year, students are required to publish an annual report listing the Fund’s activities. In 2003, the class was designated as an honors class. The Fund is subject to an annual audit by fellow students in the accounting society Beta Alpha Psi.

The Student Investment Fund’s performance has varied widely from year to year. In 1999, the fund gained over 60% on a portfolio strong in tech, only to lose 44% in 2001 as the tech bubble burst. In the fall of 2008 during the financial crisis, the fund held a relatively high proportion of cash and then invested in the spring of 2009, leading to a gain of over 45% in calendar year 2009. In 2015, SIF won the inaugural Fred Dickson Memorial Award from D.A. Davidson. The U was the only school participating in Davidson’s Student Investment Program to outperform the S&P at either the 3- or 5-year mark.

The fund received $25,000 to begin a socially responsible fund in the spring of 2011 and received another gift of $17,000 in the summer of 2013. This portfolio is devoted to investments that the fund analysts deem to be socially responsible based on a number of criteria. These investments also must meet the analysts’ standards in terms of financial and economic performance in order to be held in the portfolio.

SIF students and alumni have won recognition in a number of national and international competitions. 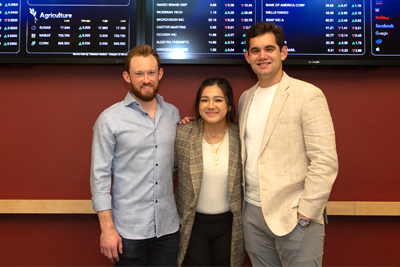